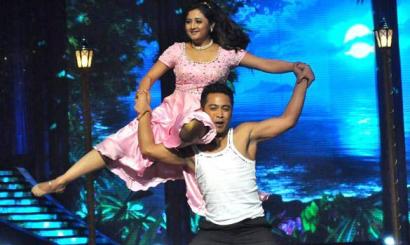 As just a few contestants are left on the show ‘Jhalak Dikhhla Jaa’, the show is getting more and more interesting. The celebrities participating on the show are taking different looks and avatars to woo the audience and their votes.

This week one of the contestants Rashmi Desai was mentored by the Bollywood actress Madhuri Dixit who is also the judge on the show. Desai performed an aerial act on the song ‘O Re Piya’ from the movie ‘Aaja Nachle’.

The actress even managed to secure a perfect 30 score from the judges for her performance. A thrilled Rashmi expressed her feelings for her mentor and said, “You are one of those people in my life who is very close to my heart.”

If Rashmi continues to move at this pace, the actress is surely going to give a tough fight to Isha Sharwani, who is also one of the strong contenders on the show and have several times secured a perfect 30 score from the judges. This week the contestants of the show will be performing with the international dancers from Las Vegas who were introduced last week. The celebrities instead of their choreographers will be performing with the international dancers.