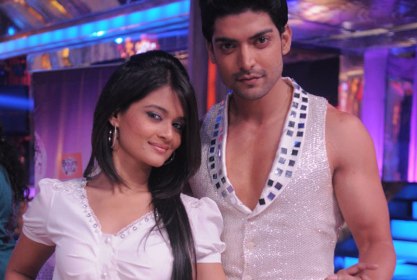 Television celebrity Gurmeet Chaudhary has claimed the title of the TV dance show ‘Jhalak Dikhhla Jaa’ after beating the finalists Ritwik Dhanjani and Rashami Desai Sandhu. The 28 year old from Chandigarh has been part of the show since the start and wooed the audience as well as the judges with his moves in the finals.

Chaudhari was accompanied in the competition by choreographer Shampa and won a prize money of Rs. 40 lakh. Gurmeet had initially not impressed the judges but picked up pace along the way and managed to glide to the finals.

Gurmeet released a statement in which he said, “When I came to Jhalak Dikhhla Jaa, I was just an actor but today, I can proudly say that I’m a good dancer too. I’d like to thank my wife Debina for her love and support. And most of all, I would like to thank all my fans and supporters who have stood by me through both the good and the bad times. I am where I am only because of them”. Chaudhari won over the audience and judges which included Madhuri Dixit, Karan Johar and Remo D’Souza.

The grand finale of the show had veteran actress Sridevi, who came on the show to promote her upcoming movie ‘English Vinglish’. Amongst the other finalists it was Dhanjani, who finished third while Rashami came second.