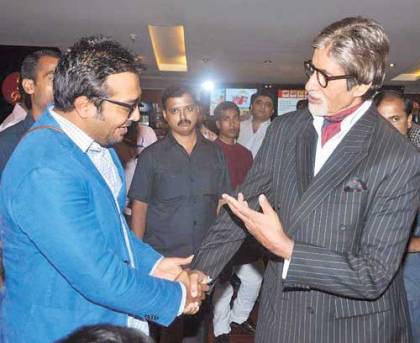 Filmmaker Anurag Kashyap and veteran actor Amitabh Bachchan have not shared a cordial relationship for years, but recently, the two came face-to-face at a special screening of director Bedabrata Pain’s debut film ‘Chittagong’ and were seen in an intense conversation.

Now that Kashyap has cleared the air between him and the veteran actor, the filmmaker in an interview narrated why he and Amitabh were not in talking terms for 14 years. Kashyap said that he was a great fan of Amitabh since childhood and grew up watching his movies.

When the filmmaker started his career by writing ‘Satya’ in 1998, Amitabh was so impressed by it, that he tried to get in touch with Kashyap. According to popular sources, this meeting resulted in Kashyap and Bachchan deciding to make a film together. Kashyap went on the say that a story was written as well, which did not work out, but the director did not dwell on the reasons for the failure.

Later in 2005, when the movie ‘Black’ was released, Anurag wrote a negative review of the movie which further affected the relationship. Kashyap has even had an argument with the actor’s son Abhishek in the past, but recently when Amitabh and Kashyap met, they sorted out their differences and will soon be working together on a movie.