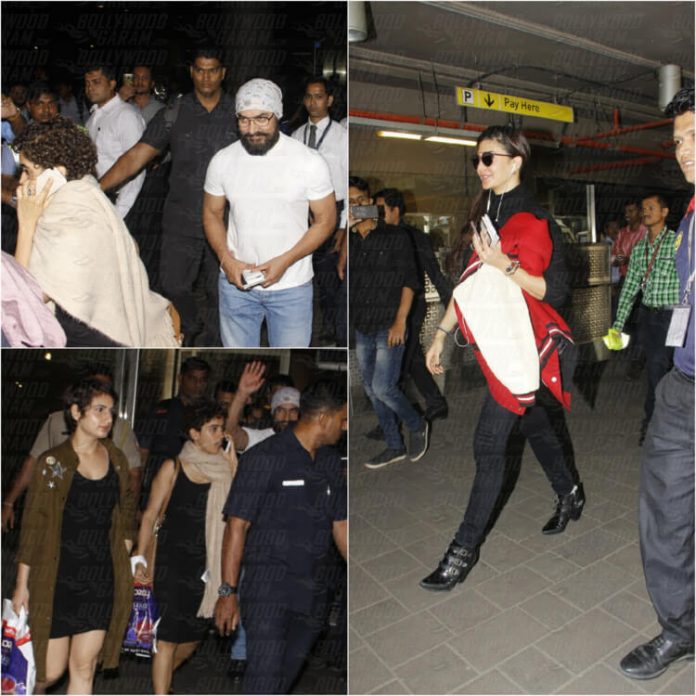 Bollywood Garam spotted Aamir Khan with Dangal Girls and caught other stars – Jacqueline Fernandez,Tamannaah Bhatia, Esha Gupta, Shamita Shetty all through this week – enjoy our exclusive weekly report on celebrities caught at the airport in style!

Dangal is just about to hit the theaters next week on Friday, December 23, 2016, and here we have for you the leading ladies and the mega star himself- Aamir Khan!

Can you spot Aamir Khan waving out to the fan’s outside the airport with the ‘Dangal Girls’ by his side? The trio was seen at the Airport on Wednesday, December 14, 2016. Both the girls were seen wearing a black dress, and they looked extremely stunning!

The girls play the role of his daughter in the movie. Fatima Sana Shaikh as Geeta Phogat, Sanya Malhotra as Babita Kumari and Aamir Khan as Mahavir Singh Phogat.

Mr. Perfectionist made sure he dropped the girls safely home in his car!

The Dangal girls were also caught at the Airport on December 13, 2016. Geeta Phogat looked classic in the yellow- white combination where as Babita Kumari ruled the chic look in black and white! They both looked gorgeous in their own personal style, Waiting to see them on the big screen now!

Dangal releases on Friday, December 23, 2016. See you all in theaters. Watch the ‘Dangal’ trailer right here!

The Sri Lankan beauty was seen at the Airport on Wednesday, December 14, 2016. Jacqueline Fernandez is always happy to pose for Bollywood Garam and here she was pouting all the way!

Co-incidentally we spotted her with the same red-jacket at the airport on December 5.

Tamannaah Bahtia is predominantly seen in Telugu and Tamil films and is quite popular when it comes ‘Telugu Cinema’. Her role in ‘Baahubali: The Beginning’ which released in 2015 was much appreciated. Bollywood Garam caught the pretty actress at the airport on December 11, 2016. She was spotted wearing a knotted shirt-dress paired with black heels, gorgeous!

The Jannat 2 actress looked pretty casual in her airport look, when spotted by Bollywood Garam on December 12, 2016. We love her black sneakers and long cardigan. Did you notice that fractured hand though?

Bollywood Garam wishes Esha Gupta a speedy recovery and hopes to see more of her on the big screen, soon!

The business tycon was spotted at the Mumbai Airport on December 12, 2016 minus wife Shilpa Shetty who was busy shooting for her dancing talent show- ‘Super Dancer’. Both were seen wearing matching outfits including the sneakers! The father-son duo looked super-cool together!

Shamita Shetty was seen at the airport with her mother Sunanda Shetty along with Brother-in-law Raj Kundra and nephew Viaan.

Shamita Shetty looked good in her casual yet stylish outfit. The leather jacket is a bonus!

And here’s the cutest picture ever of Sunanda Shetty giving her grandson, Viaan Raj Kundra a big warm hug! They look adorable together, don’t they?

The ‘Commando’ actor  – Vidyut Jammwal is all geared up to set the big screen on fire with ‘Commando 2’ which is releasing on January 6, 2017. ‘Commando 2’ is a squeal of ‘Commando’ and is directed by Deven Bhojani. You can expect an action packed performance!

He looked dashing at the airport in those ripped- jeans and white t-shirt. We like his orange cap and blue sunnies. 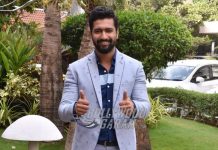