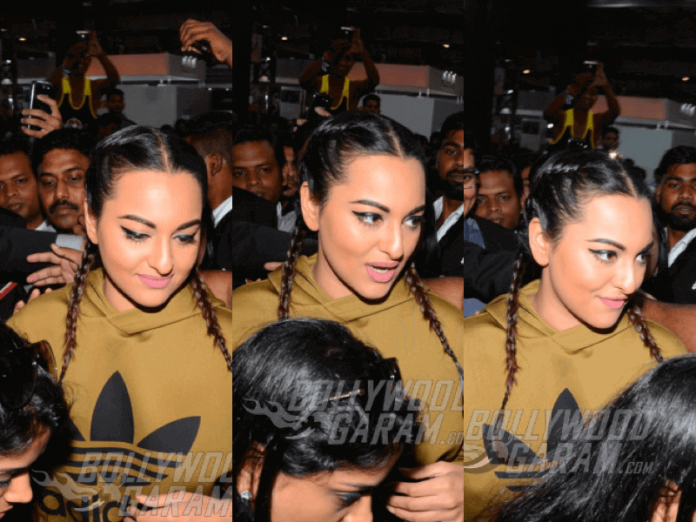 The Akira actress was spotted amongst much fanfare and paparazzi at the National Stock Exchange, Mumbai with a stylish braided hairdo and a beige Adidas hoodies. Sonakshi was last spotted at Mumbai Airport on January 2, as she returned from a 5 day long trip to an undisclosed location.

Her performance in her latest movie, Force 2 received great appreciation from critics and audiences. She played a lead role in the movie, starring opposite John Abraham. All the stunts performed by Sonakshi Sinha were real and it was really daring of her!

Sonakshi Sinha has quite a few movies lined up in 2017 and 2018 which include projects like Noor – releasing on April 21, 2017, Namaste England – releasing on a yet to be decided date this year. While Dabangg 3 stars Sonakshi opposite Salman Khan, Arbaz Khan, Parineeti Chopra and Vinod Khanna and is scheduled to release on Eid 2018.

We hope you enjoyed the gallery, stay tuned for more updated on your favorite celebrities only on Bollywood Garam!