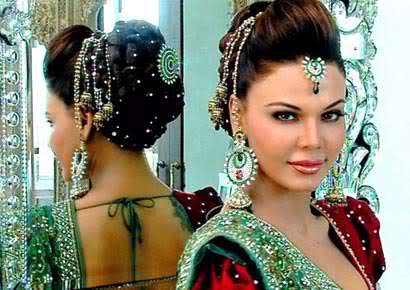 Bollywood item girl and controversy queen Rakhi Sawant had shot to fame with her appearance in the first season of the reality show Bigg Boss. The item girl is once again expected to make an appearance on the show this week, which is in its sixth season. The news was revealed by ex-Bigg Boss contestant Pooja Bedi.

Bedi keeps her online followers regularly updated via the social network site Twitter. The actress recently tweeted, “Bumped into Rakhi Sawant at the airport & interestingly she’s going to be chatting with Salman on #BB6 this week!” Only time will tell if the actress will just chat with the host Salman Khan or will also be given an opportunity to enter the house and meet the contestants.

The show became popular after Rakhi Sawant and Kashmira Shah picked a cat fight in the house. After this, many other contestants on other seasons of the show too picked the same strategy, to stay on the show for longer. Actress Dolly Bindra and Pooja Missra are the best examples of people who used the strategy to gain maximum footage for their time on the show. Missra was asked to walk out of the show, as she had become violent towards co-contestant Siddharth. This week the contestants who have been nominated include Karishma Kotak, Aseem Trivedi, Sampat Pal and Sapna Bhavnani.