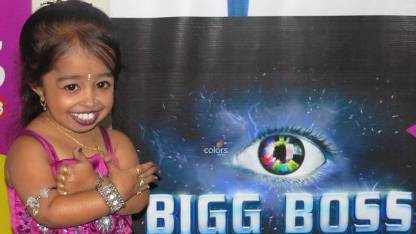 After the dramatic exit of Imam Siddique from the house of Bigg Boss 6, the world’s shortest woman Jyoti Amge from Nagpur has entered the mud house. Amge will be accompanied by Aashka Goradia and Nirahua.

Jyoti is a 19-year-old girl who entered the Limca Book of Records and the Guinness Book of Records for being the world’s shortest woman. The teenager is short, but she has big dreams to make it in the entertainment industry.

Amge said that she is not sad and does not have any issues with her short height. While talking about peoples reactions regarding her height, she said that people do talk about it, but she does not pay attention to them as she focuses only on her work. Many people have put her down in the past, but there are also people who support her.

The record holder has appeared in a music video with singer Mika Singh for his album Risky. The Nagpurian has also appeared on the talk show ‘Movers and Shakers’, hosted by Shekhar Suman. Jyoti says that she had hosted the Guinness Book of World Records show in Italy and is also called for various shows across the world. She says that she is a huge fans of Salman Khan and wishes to do a movie with him some day.