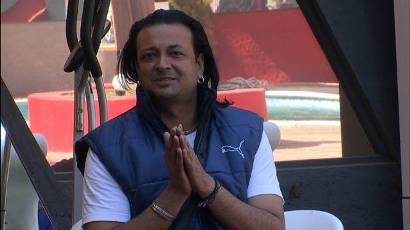 Actor and TV host Santosh Shukla recently confessed his love for the Bigg Boss 6 co-contestant Karishma Kotak in front of the cameras. Santosh was sitting in the garden area along with Vishal Karwal, Imam Siddique and Nirahua; he then suddenly confessed that he is in love.

When asked for a name, he went up to the cameras and addressed a message to the audience, production house and the host Salman Khan. Shukla said that he desperately wants to change his image as a big flirt in the house and would change only if a decent girl like Karishma would enter his life.

The actor also said that his love for the actress was pure. Till now the wild card entrant was trying to lure Aashka Goradia while they were in the padosi house, but then Shukla’s flirty acts started irking Aashka and she said that she is already committed. Karishma was seen walking towards Shukla the moment he completed his candid confession.

Meanwhile, Imam Siddique said that Santosh would surely conduct a Swayamwar while on the show. Recently, the housemates from the ‘padosi’ house merged into the main house after the mud house was destroyed. The housemates are looking forward to the elimination this week as well.