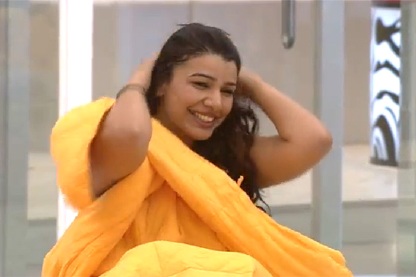 On December 7, 2012, the reality show Bigg Boss 6 saw the double eviction of Vrajesh Hirjee and Mink Brar. Vrajesh was in the house of the reality show from day one, but Mink had entered the show midway as a wild card entrant.

Hirjee spent a total of 60 days in the shared accommodation,  including a short stay in the Padosi house. For Mink it was a life changing game when Bigg Boss ordered her to cut her hair, something that she had refrained from doing for many years of her life.

Actor and comedian Vrajesh saw the game as a way to entertain the audience and his co-contestants. The viewers saw the actor as someone who could entertain and to also turn the house in to a laughter zone.

While in the house Vrajesh had a heated argument with Imam Siddique, after which he decided to stay away from all drama and fights. On the other hand, Mink could not get along with Delnaaz and Sana, but had a soft corner for Niketan. The actress also considered Vrajesh to be her younger brother. The other celebrities continue to be in the house and the political and fight between Delnaaz, Rajeev and other housemates is expected to continue.