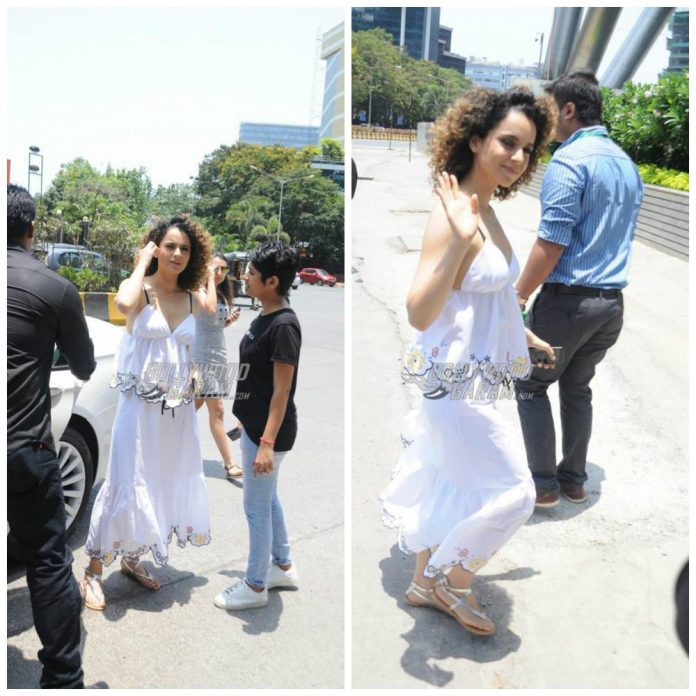 Kangana Ranaut is one of the few actresses in Bollywood who has never disappointed on the fashion front. From saris and ethnic wear to casuals and formals, Kangana has always maintained her style statement. The Queen actress made the coolest appearance as she made her way to Facebook’a office for an interview on May 16, 2017.

Kangana appeared in a white top with frills and a matching white skirt with metallic strappy sandals. The actress has the busiest schedule as she is busy shooting for Manikarnika and Simran, in which she will be seen playing the role of a Gujarati NRI, Praful Patel. The film is directed by Hansal Mehta and produced by Bhushan Kumar. Simran also stars Sohum Shah, Rupinder Nagra, Sooraj Vyas and Esha Tewari and will be released in theatres on September 15, 2017. On working with Kangana, director Hansal Mehta told a leading tabloid, “Working with Kangana was intense and satisfying. She is a fine artist and a unique talent who is deeply involved in the process of filmmaking. This is a new journey in my career, one that I’m always going to remember. My producing partner, Shailesh Singh, and I have offered to co-produce Kangana’s directorial debut. It’s going to be superbly compelling. I’m still finding that script I can make next with her, maybe a Simran sequel?”

Kangana also recently launched the poster of Manikarnika: The Queen of Jhansi. Manikarnika is a biographical film based on the life of the historic figure Rani Laxmi Bai and will see Kangana playing the lead role. The makers have started the shoot of the film from May 2017 and the movie is expected to release in April, 2018.

Kangana shot to fame with the movie Fashion directed by Madhur Bhandarkar. The actress also won her first National Award for her performance in the film. Now enjoy her fresh summery look from the streets of Mumbai!