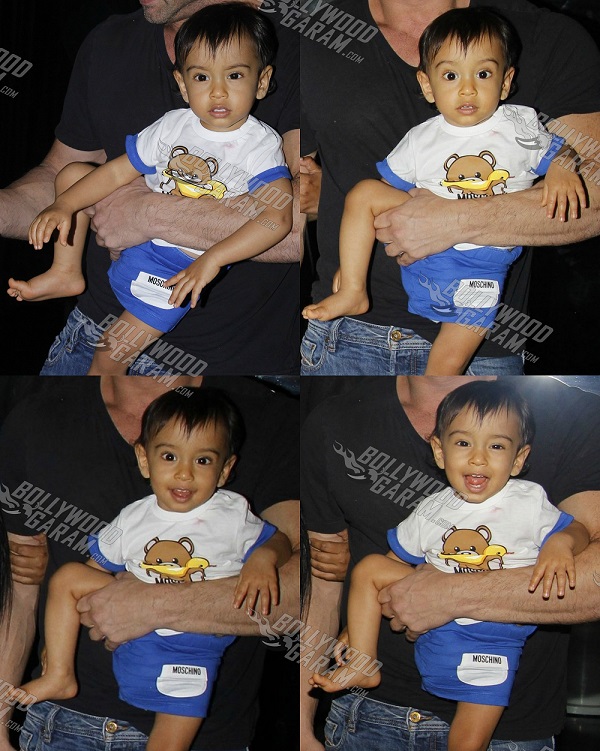 Actor Sohail Khan is busy promoting his upcoming film Tubelight with brother Salman Khan, which hits theaters on June 23, 2017. Seems like Sohail decided to take a break as he was seen spending some quality time with sister Arpita, Aayush and their son Ahil Sharma. The actor known to be extremely fond of his and was snapped holding him on a family outing with Aayush and Arpita on June 1, 2017.

The family was happy to pose for shutterbugs and the little one, Ahil too enjoyed the attention that he got from the paparazzi. While Sohail Khan looked trendy in a casual t-shirt, denims and a cap, sister Arpita was seen in a black outfit. Aayush Sharma, who is likely to make his debut in Bollywood, was seen in a white t-shirt and ripped black jeans. With sneaky yellow eyes painted on them, his shoes grabbed most of the attention.

Sohail’s upcoming film Tubelight is set at the backdrop of the Indo-China war. The film also features Chinese actress Zhu Zhu. Songs Radio and Naach Meri Jaan, from the movie have created quite a stir amongst the audience! Doting uncles Sohail and Salman Khan also shared an adorable video of Ahil boxing Salman as the two unveiled Tubelight’s official movie trailer. check it out –