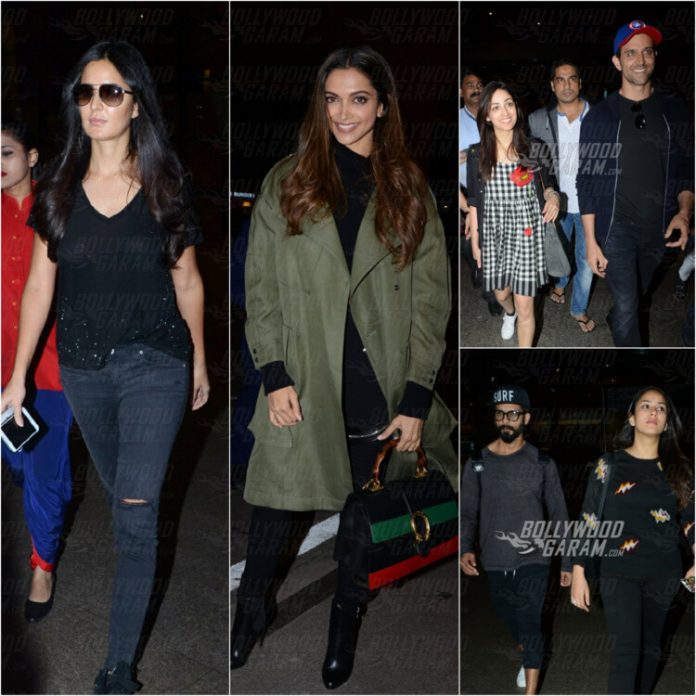 New Year has just began and we already have Bollywood Celebrities collecting air miles in style! It’s been a wonderful week at the Airport spotting all our favorite Bollywood Celeb’s leaving us flawed in their gorgeous avatar.

Airports have seen some amazing fresh fashion over the week, enjoy our exclusive coverage –

Deepika Padukone looked drop dead gorgeous in her Airport look when spotted her on January 13, 2017 in a military green long over-coat with black boots and a bag. We loved the way she carried herself!

As Vin landed in India on, January 11, 2017 along with his co-star Deepika Padukone, he got a Grand-Desi welcome. Check Here!

The Hollywood Actor was spotted at the Airport on January 13, 2017, but this time to fly back to his own country!

Shraddha Kapoor looked lovely in a grey ankle length dress which she paired it with a black coat and white sneakers! She bares the perfect combination of comfort+style in her airport outfit.

We loved his black bag though!

Aditya Roy Kapur choose to carry his bag himself even after one airport staff wanting to help him out. Impressive!

Co- stars Shraddha Kapoor and Aditya Roy Kapur are headed for a promotional event of their upcoming movie Ok Jaanu which is set to create magic in theaters on January 13, 2017. Read Ok Jaanu Movie Review

Hrithik Roshan with co-star Yami Gautam was seen at the Mumbai Airport on January 8. The Kaabil co-stars had a big smile on the face as they return from Dubai after promoting their upcoming movie- Kaabil which releases on January 25.

Hrithik was seen wearing a black t-shirt with blue jeans and had a navy blue jacket over! He looked handsome as always!

In company was Yami Gautam who wore a short black and white dress and paired it with a black shirt as a shrug!

What did they just see?

Both of them look extremely adorable together and show some great chemistry on screen!

Hrithik Roshan who brought in his 43rd birthday on January 10, 2017, was seen celebrating with friends, kids and ex-wife.

The actress looked pretty cool in her simple and yet so stylish outfit which she choose to wear at her recent visit to the Airport on January 13, 2017.

Shahid Kapoor looked effortlessly stylish in his Airport look on January 11, 2017. We loved the way he wore his joggers, pairing them with a grey full sleeved knitted t-shirt, black surf cap and white sneakers! Shahid slayed it in black!

Wife Mira was seen by his side in a black top and leggings. But the big question – Where’s baby Misha?

Looks like this beautiful couple have been honeymooning all year around since their wedding! They are always seen travelling and posting pictures from their extended honeymoon.

Both of them walked out of the Airport hand in hand, that’s what couples are supposed to do right?

Parineeti Chopra has been showing off some great style over the past few months! She had the perfect chic look on her recent airport visit on January 8, 2017. She was seen wearing a black and red jacket with brown boots, a perfect outfit to take over winters.

And i must say, the frames suit her completely. Good choice Pari!

Yet again Parineeti Chopra looks great in a short white blazer dress paired with white sneakers, when we spotted her on January 13, 2017. We like the fact that she always has a pretty smile on her face!

Director Rohit Shetty was seen at the Airport on January 8. The director who has given us some amazing action movies over the past looked ever charming in military green cargo pants and t-shirt.

The actress who gives us some major fitness goals was seen at the airport! We liked her gladiator glasses and quirky hand bag!

Ayushmann Khurrana had a super sporty look on him when snapped at the airport on January 8. He was seen wearing a red Adidas t-shirt, military green cargo pants and white sneakers!

Ayushmann Khurrana was spotted at the airport on January 12, 2017 in full superman mood. He made sure he matched up to his superman jacket and posed for us!

Axwell, is a Swedish DJ and was a member of Swedish House Mafia! He’s given us some amazing mixes and concerts over the time. We spotted him at the Airport on January 8, 2017.

Ameesha Patel was seen at the airport on January 11. She choose to wear a denim shirt on her denims three-fourths and paired it with a Dolce and Gabbana bag.

The yesteryear villian popularly known by his screen name Ranjeet in the Bollywood Industry, was spotted at Mumbai Airport in a yellow dhoti- kurta, sporting his signature turban – adding the Indian touch.

Stay tuned to catch some real fashion at the Airports, only on Bollywood Garam!