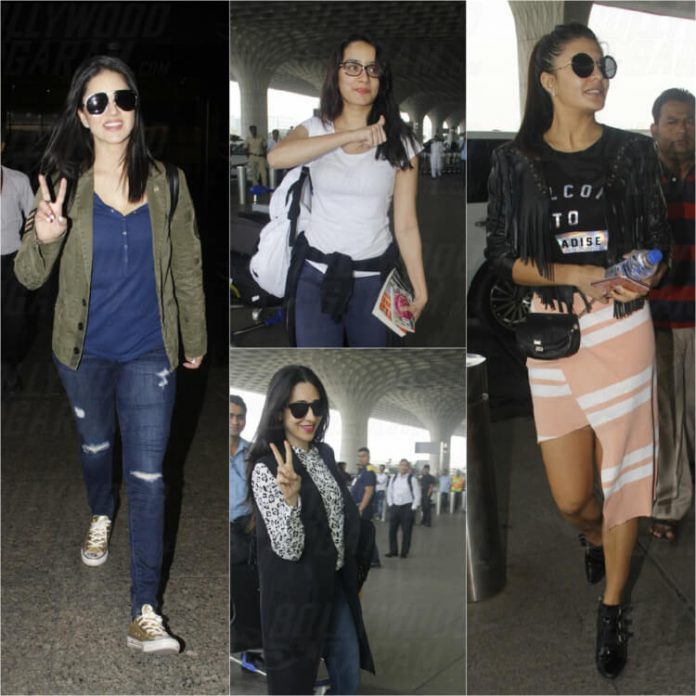 Airport Fashion or Fashion Runway? It’s pretty much the same thing these days!

Bollywood Celebrities can’t stop collecting air-miles and showing off their stunning styles at the Airport. You will see the most trendiest and stylish looks at the Airport. Let us take you over some amazing Airport looks of the week!

Hrithik Roshan and Yami Gautam have started promoting their upcoming  movie Kaabil in full swing, as it is set to hit the theaters on January 25, 2017. They were seen at the airport on January 21, returning from a promotional event.

Hrithik ,Yami  and the team has their Kaabil t-shirts on. Hrithik paired it with a nice leather jacket and Yami with a black long over coat.

Check Hrithik Roshan And Yami Gautam showing off some great style and Chemistry at the Promotonal Event of Kaabil in Delhi.

The hot couple was seen at the Mumbai Airport on January 17. Sunny looked extremely pretty in her military green jacket and golden sneakers, where as husband Daniel kept her in good company.

Sunny Leone gives a sizzling performance in the song Laila me Laila from the movie Raees which is set to release on January 25, 2017.

She was seen at the TAMASHA Launch Event this week and was also spotted on a Dinner date with her husband later.

Bollywood bombshell Jacqueline Fernandez slays it in style at every freaking event, be it awards or airports. She was spotted at the Airport on January 17, and looked effortlessly gorgeous in a fringe leather top and a peach striped skirt.

And here’s Jacky landing back at Mumbai Airport the next day sporting a military jacket, paired with a black top, ripped jeans and grey open-toe heels. Check out her fairy tale inspired look at the Red Carpet of 62nd Jio Filmfare Awards.

Jacqueline Fernandez and Siddarth Malhotra getting cozy and flirty on the Koffe couch, on the sets of Koffe with Karan.

We spotted the elegant actress with husband-producer Boney Kapoor at the airport on January 21, 2017. Boney Kapoor is a successful Indian Film producer and has many amazing films to his credits.

They had a cute moment at the airport, check it here-

Bonney kapoor was seen minus wife Sridevi on January 19, 2017. He looked smart in that leather jacket!

The Ok Jaanu actress who just gave a powerful performance in the movie was seen at the airport. Shraddha likes to keep it simple in tracks and tee’s, specially when it comes to travelling. She also had a book along keeping her company for the flight journey, that’s a good idea right?

Shraddha had her sporty look on, in both her airport appearances!

This ever green actress looked stunning in her airport look, when spotted her on January 16, 2017. She choose to pair her outfit with a long black jacket and boots. And that smile, it’s perfect!

This time she opted to be in her comfort zone, joggers and star wars t-shirt! Check out her latest pictures from Lunch at Pali Village Cafe with Kareena, Malaika and Amrita.

Arjun Rampal was seen at the airport on January 21,2017. He looked quite charming in his black joggers, jacket and Adidas Superstar shoes.

Preeti Zinta attended the 62nd Jio Filmfare Awards with her husband Gene Goodenough on January 14, 2017! Check all their amazing pictures and tweets, from their Filmfare debut right here.

This South-Indian diva was spotted at the airport on January 17th and 18th. She very well knows how to keep it simple but still trendy! Check out stunning pictures of Shriya Saran wearing a beautiful silk sari at a lunch event, along with Hema Malini.

Shriya Saran rocks the chic look in a black ankle length skirt and boots, on her recent visit to the airport on January 17. She nailed it in both her airport looks, what say?

Raveena Tandon had her chic mode on when we spotted her at the airport on January 21 in red lips, black boots and a satchel.

Oh wait! We saw Deepika Padukone carrying a similar satchel at the airport on January 13, 2017.

The Action-Director looked dashing in his blue-full sleeved t-shirt and white sneakers, when spotted at the airport on January 18, 2017. We are waiting to see some powerful action packed films directed by Rohit Shetty, this year.

Tamannaah choose to be dressed in casuals at the airport on January 21. She wore a black and red checked shirt paired with ripped black jeans.

Neha Dhupia had her winter mode on at the airport on January 16 and looked gorgeous in a bej color long over-coat with a black and white muffler. Check out her exclusive gallery right here.

Boney Kapoor has been a successful Indian Film producer and has many amazing films to his credits. He looked smart at the Airport in a leather jacket when spotted on January 19, 2017.

Emrran Hashmi looked quite subtle in a white shirt and black pants, way to formal for an airport look! Maybe he has a meeting to attend?

Soha Ali khan looked effortlessly pretty in acute ankle length dress and she paired it with some matching sneakers. We like that little piece of accessory she wears around her neck!

The muscular actor looked quite handsome in his grey ripped tracks and jacket. His colorfull shoes and red cap filled in the missing colors. Vidyut is also gearing up for his upcoming movie Commando 2, which is set to release on 3 March 2017.

Anupam Kher has given some amazing movies in the past, and was spotted at the Airport on January 17, 2017.

Reha Kapoor is the woman behind sister Sonam Kapoor’s amazing fashion statements. She was here at the airport on January 21, in a long black cardigan and white sneakers.

The voice behind the song ‘baby doll’ was seen at the Mumbai Airport on January 21, 2017. She looked extremely pretty in skin fit black jeggings with a navy blue colored over-coat. The black hat and purple satchel add to her amazing airport look!

This young model and now turned actress was seen at the airport on January 19 in a navy blue color dress which she paired it with some sexy black boots and bag! Check out her stunning look from the Red Carpet of 62nd Jio Filmfare Awards held on Saturday January 13.

Did she just repeat her black skin fit bottoms? No stress, they look cool none the less!

Director and Producer Sajid Khan was spotted at the airport on January 17, 2017. He sported casuals sport shoes with neon green highlights.

Sunny Deol with his sons

Sunny Deol was spotted at the airport with his sons – Karan Deol and Rajvir Deol on January 16, 2017. While his sons opted to wear black T-shirts with pants, Sunny Deol was seen wearing a light blue shirt with jeans an sport shoes which complimented the whole look.

Actress Evelyn Sharma opted for a simple casual looks with ripped jeans, a blue tank top and a white shrug on it, on her recent airport visit on January 18, 2017.

Amy Jackson happy to pose for the cameras as we spotted her at the airport on January 17, 2017. Her brown suede boots looked lovely and complimented her loose fit knitted top.

Amy was also spotted along with Varun Dhawan, Tammanah Bhatia, at Mehboob Studio and at the Popular Pali Village Cafe in Bandra with Elli Avaram!

That’s all for this week. Stay tuned for more updates on the best in Airport Fashion only on Bollywood Garam!